This whole event of Ksi vs Logan paul would start all the way back in February 2018 as at the time Ksi would have a fight against Joe Weller ( Youtuber ) due to beef they had for the past 7 months before the fight. This fight would end up with Ksi winning the match with a K.O in the third round leaving Ksi as the new youtube boxing champion. The match would settle the beef with each now having respect for each other but after the match Ksi would be asked the simple question of who’s next, which he would respond with Logan and Jake paul.

Both of these youtubers at the time were one of the most hated youtubers with Jake paul in 2017 causing lots of controversies with his neighbors and Logan at the time being in the controversies of the suicide forest video. With this call out the paul brothers would make a response saying that “Ksi is irrelevant for them to fight and that their dad should fight ksi instead” and much more insulting to Ksi about how he wore head guards during the fight. This kind of response would call another response from Ksi’s little brother Comedy Shorts Gamer where he would call them out and pretty much say you are a coward but in a much more vulgar way, and of course this would call for another response video from Jake. Ksi would then make another response video where he would call out the Paul family saying that he would only fight Jake but the paul would of course use this whole event for views making multiple videos that would have Ksi’s name in them.

This would lead to Ksi to move past Jake Paul but Ksi’s little brother didn’t as at the time he was in  L.A and would contact Jake Paul about a meet up in a park for answers about the whole event. Jake would of course agree to meet up in the park but would change his intentions of being as he would be bringing his camera man and a two pairs of boxing gloves confronting Deji and asking him to fight, but of course Deji would decline his offer. Jake paul would soon upload his video about this confrontation and would just add more to this beef. After this both Ksi and Deji would start training with each other, with the Paul brothers also start training with both parties training hard. The fight would officially  be announced and would take place August 25 2018 with Logan and Ksi being the main event while Deji and Jake would be an under card match.

Many would put down Deji with many saying that he should just drop out and let someone else get to fight Jake but he wouldn’t give up and would push himself to his limits with him ending up in a hospital due to him training hard. The night would come where both parties would clash with many attending the match both had a lot on the line for their name on youtube. The Deji vs Jake paul fight would be on first with it being a very close match but sadly even with all his efforts Deji would still lose the match. The main match came on and the match would go on to the six rounds with neither of the fighters getting a K.O on each other as they promised, leaving the m 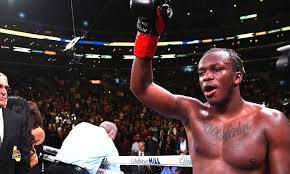 atch to end in a draw. After the fight was done Ksi would call out Logan once again to a second match but this time with no headgear on. Many in the online community would see this draw and come to the conclusion that this match was just a simple cash grab and the second fight would end up the same, but to many surprise the second match would end in a much different way with Ksi being announced the winner after Logan being taken points away from the match after he kept hitting Ksi after he was down.